Think of digital currency, and Bitcoin comes to mind. But the popularity and adoption of Bitcoin would have been much more uncertain in the early days, when no one knew about cryptocurrencies.

Today, the opposite has come true: Bitcoin and other cryptocurrencies are soaring in popularity – so much so that governments and banks have to step in and assert their presence. For one, cryptocurrency as a decentralised currency forms a threat against centralised forms of currency from banks and governments. Yet, at the same time: what if there is a future in cryptocurrency? Would their refusal to get involved cause the eventuality of getting left behind?

Countries where Bitcoin is a legal tender

In June of 2021, El Salvador became the first country to adopt Bitcoin as a legal tender. This means that anyone in El Salvador should technically be able to pay for a cup of coffee using Bitcoin, and they will not be rejected by shop owners. As a major proponent of Bitcoin, El Salvador's President Nayib Bukele hopes to make money transfers into the country more affordable with Bitcoin. However, the issue of low mobile penetration and technology know-how remains. It remains to be seen how El Salvador will scale up the usage of Bitcoin in its country, where the common person does not even own their own computer, not to mention a crypto wallet.

Another country that has since embraced Bitcoin as a legal tender is the Central African Republic. In some sense, the country's profile is similar to El Salvador's in that they rely on remittances for their finances.

Cryptocurrency as a good

Cryptocurrency laws in the US

In New York, the authorities have made a 180-degree turn from their initially wary stance, with hopes now of attracting more cryptocurrency companies back into the city.

Countries regulating the exchange of cryptocurrencies

Many other developed countries are taking a careful but accepting posture towards Bitcoin and other cryptocurrencies, as they recognise that it is here to stay. The United Kingdom (UK) regulates crypto exchanges operating in its country by registering them with the Financial Conduct Authority (FCA). The main reason is to guard against illegal money laundering activities and ensure that services provided to consumers are legitimate.

Similarly, cryptocurrency exchanges, including any Bitcoin, Ether, or Litecoin exchanges in Singapore, have to be licensed with the Monetary Authority of Singapore (MAS). Earlier this year, the Singapore authorities also issued guidelines restricting advertising by cryptocurrency service providers. Market experts expect to see more regulations being made in the road ahead.

Countries restricting the trade of cryptocurrencies

In stark contrast to nations that have embraced crypto, some nations are going to the other extreme. Some of these fears are valid: the use of cryptocurrency for money laundering, illegal trafficking, and more are some of the risks associated with unregulated cryptocurrency trading.

So, countries such as China, Vietnam, and Nepal have banned cryptocurrency in some way or another. For example, they may make it illegal to operate any cryptocurrency exchanges in their country.

It is fascinating to see how economies and governments around the world have reacted to the cryptocurrency boom, taking on vastly contrasting stances. While it is natural to be wary of anything new, it is also a delicate art to balance the risks and potentials of cryptocurrency.

For traders here, it looks like bearing these constant changes and regulations for crypto exchanges in Singapore will be here to stay, until the world has cryptocurrency more figured out.

Digital payment token investments, such as cryptocurrencies, are not guaranteed by service providers or cryptocurrency exchanges and the government. It is crucial to exercise caution in investing, including the awareness that a part or all of the capital may be lost and may not be recovered especially in cases of high price volatility or down market, bankruptcy, seizures and other factors. Hence, the user’s risk tolerance, investment appetite or capacity for loss should be set firstly and they should observe safe and knowledgeable investment practices accordingly. For more information, please visit MAS' website.

Coinut.com a financial entity regulated in Canada and an exempt entity under the Payment Services Act in Singapore. Please be reminded that cryptocurrency trading is highly risky and is not suitable for the general public. For more information please refer to Risk Warnings and Risk Statements. 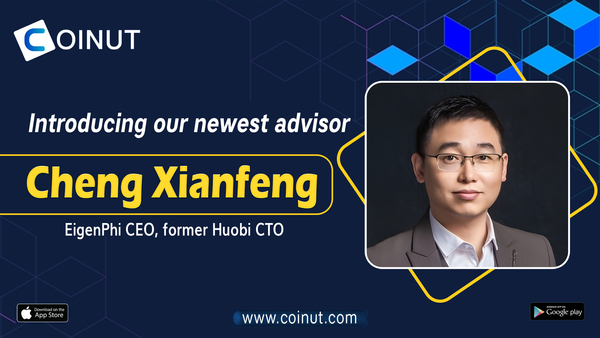 Coinut (Coins U Trust) is welcoming one of the most established personalities in cryptocurrencies and blockchain technologies as an advisor.

Litecoin (LTC) is one of the first altcoins intended to be a 'lighter' version of Bitcoin. Read on how its price is predicted to perform for the next few months.